Do you remember a time when shopping was an adventure? When a bus ride downtown ended at an enormous red-brick store with glittering window displays? Do you reminisce about riding smooth, shiny escalators from floor to floor, or having a Maurice Salad in a gracious, hushed dining room high up in the sky? Maybe you enjoyed hunting for bargains below street level, or browsing for books in Detroit’s largest book shop? Maybe you recall the smell of exotic fragrances wafting through the air on the sumptuous first floor of Hudson’s, Detroit’s World-Famous Department Store. If you do cherish memories like these, come join architect and historian Bruce Allen Kopytek as he leads you on an intoxicating journey of exploration through this lost Detroit landmark. Along the way, you’ll discover the rags-to-riches story of Joseph L. Hudson, the culinary delights of Hudson’s restaurants, and the stories of people that made it all happen – right here in Detroit.
This is the story of The J. L. Hudson Company 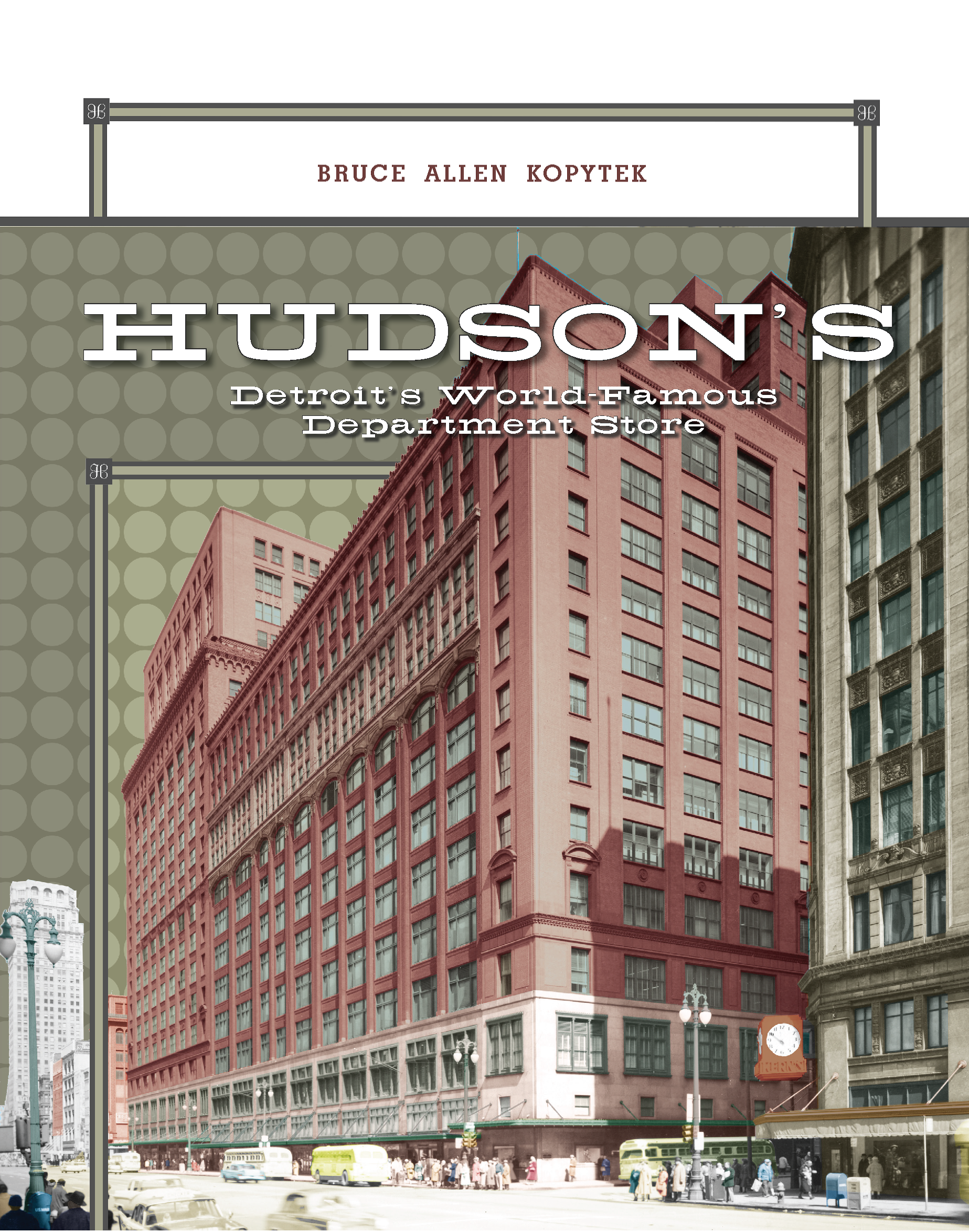 The Paris of America

Detroit, the city chosen by Joseph. L. Hudson in which to develop his business, was once America’s fifth-largest city; a dynamic center of industry that attained worldwide renown. The wealth produced by its factories and robust commerce was used by its leaders to forge and embellish a city that, from time to time, was known as “The Paris of America.” While this moniker may be an anomaly to those who also know Detroit as the largest American city to ever file for bankruptcy, the comparison between the two cities can be understood through a brief study of Detroit’s history. What’s more, Hudson’s home town, during the store’s heyday, was a bustling metropolis that, like the store itself, might be incomprehensible to someone familiar with Detroit’s physical state at the end of the twentieth century, even though the city is currently in the midst of a revival that, after all the devastation, has once again changed its face considerably.

The Parisian connection stems from three separate and distinct sources. To begin, Detroit was originally founded as a French outpost, and for many years housed a population that spoke the French language exclusively. It was inevitable that Detroit would participate in the joie de vivre for which French culture is widely known.

Secondly, by 1805, when the small settlement was, at least for the time being, a part of the young American Nation, it was re-planned from a haphazard town of wooden buildings, using a layout (the “Woodward Plan”) that envisioned a series of town squares and circuses linked by grand boulevards and wide, straight avenues. This plan, while never fully realized, resulted in a unique geometric layout for the center of Detroit that bears some resemblance to the nineteenth-century boulevards of Paris that give the beloved French capital its distinctive layout and elegant sense of space.

Thirdly, Detroit’s economic and cultural prowess inspired a sense of authority, in its day, that was reinforced by its many private and public institutions, and the monumental architecture required to house them. Pre-World War II photos of Detroit show a cohesive urban environment, enlivened by crowds of people on in its tree-lined streets and in its well-defined urban spaces, that has been all but lost in the modern era. The dynamism associated with Detroit in the past, in combination with its physical form, compared well to Paris, a city often noted for many of the same characteristics. 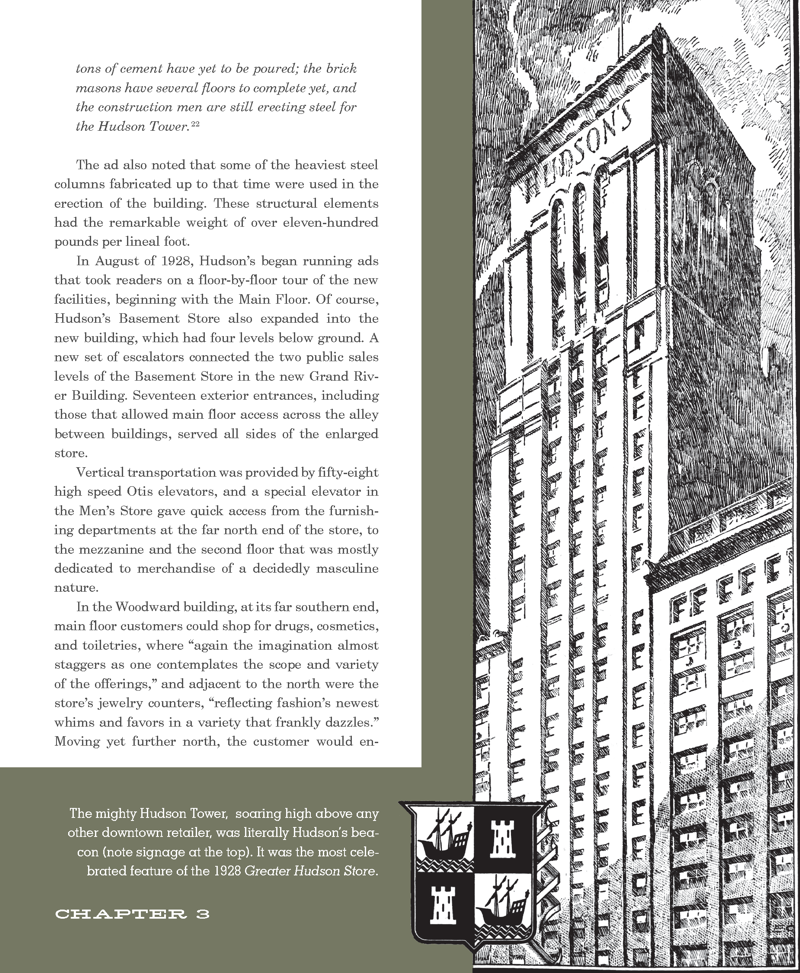 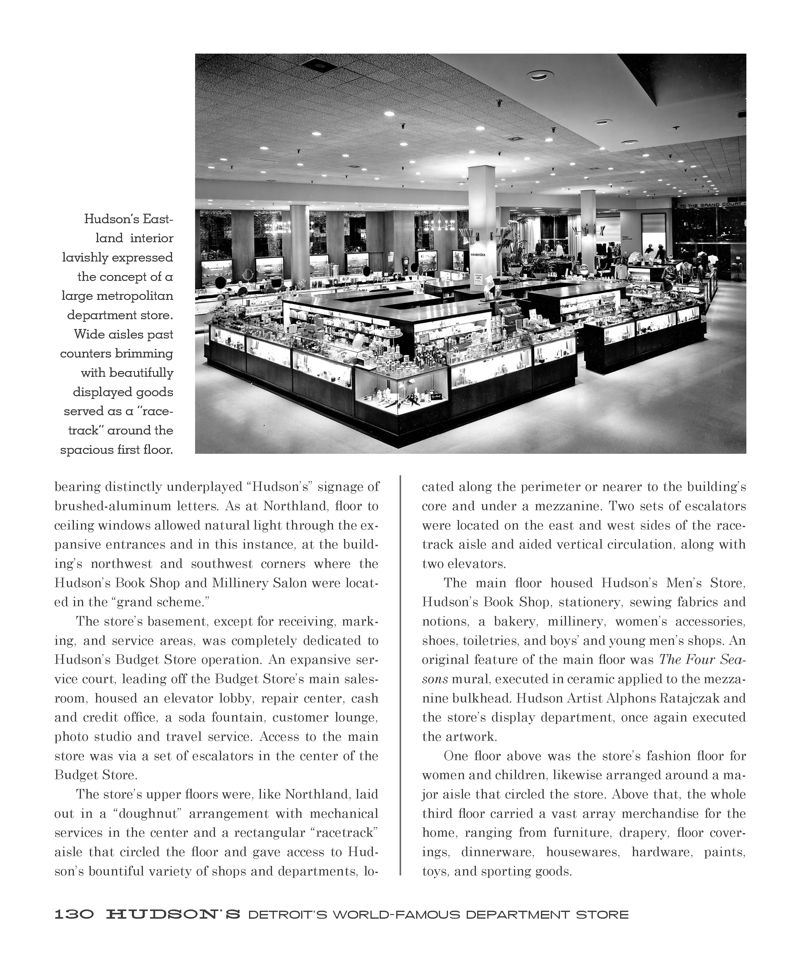 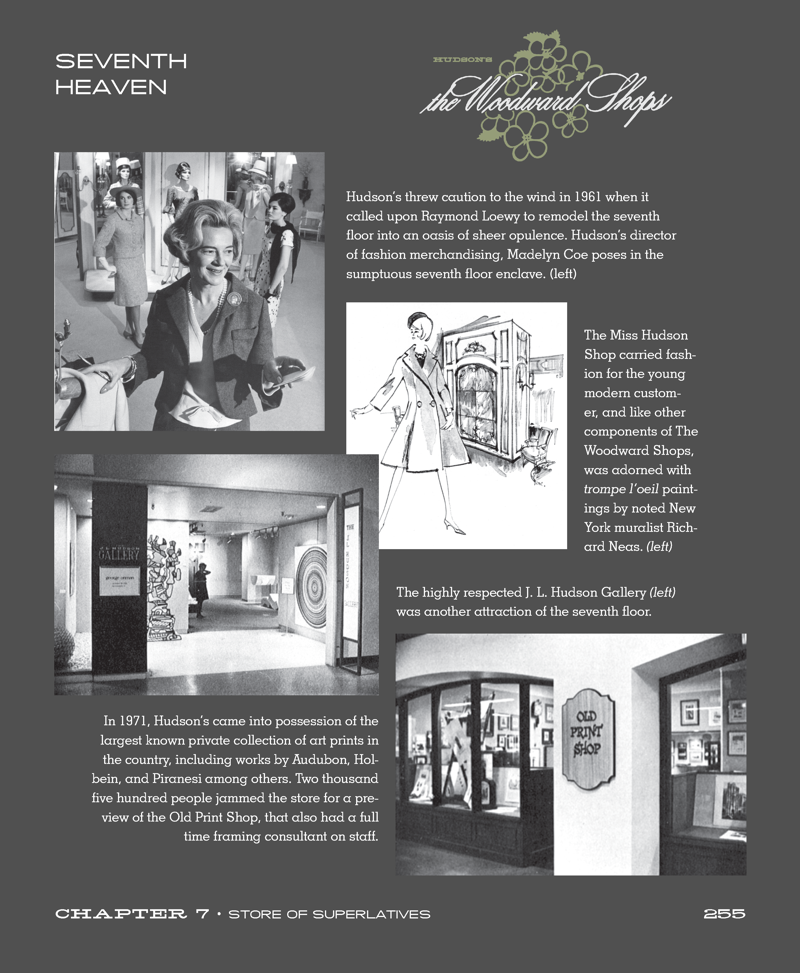 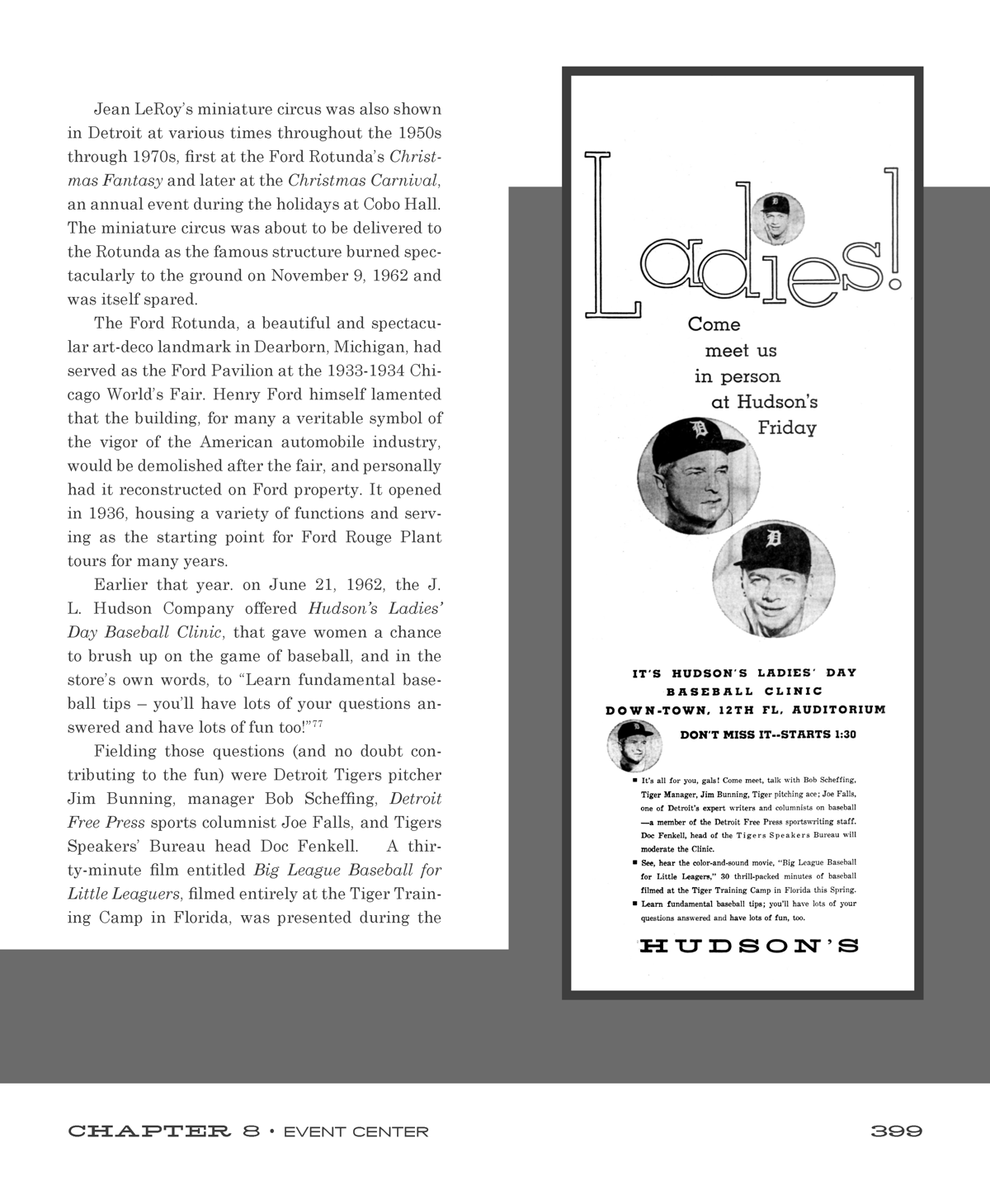 We do not want any nonsensical enthusiasm or booming, but we do like men with the joy of life and the optimism that conquers obstacles. We like the man who, after a defeat, raises his head and smilingly asks “What’s the next race?"

Tour 21 Bazaars filled with treasures from all around the world as Hudson’s turns the spotlight on imports. Now for two big weeks our 1st Floor takes on the atmosphere of a gay Old World marketplace. See colorful flags of the Free World and bright flower-banked kiosks downtown. Replicas of famous bridges span Woodward Avenue aisles – London Bridge, the Ponte Vecchio and more. Enjoy it all. Browse in import-laden shops that beckon you with their unique wares.

I knew Hudson’s when it was somewhat younger, but even then, there was a Hudson optimism, a Hudson confidence, a Hudson vision, and a Hudson courage. We all felt it . . . Destiny was walking the aisles even in those days. We envisioned a greater Hudson’s in the rather distant future. It was just a matter of time. But time never lingers in dynamic Detroit. The other day I came back. The dream had come true! Seemingly overnight!

You may now order Hudsons: Detroit’s World-Famous Department Store directly from this site. 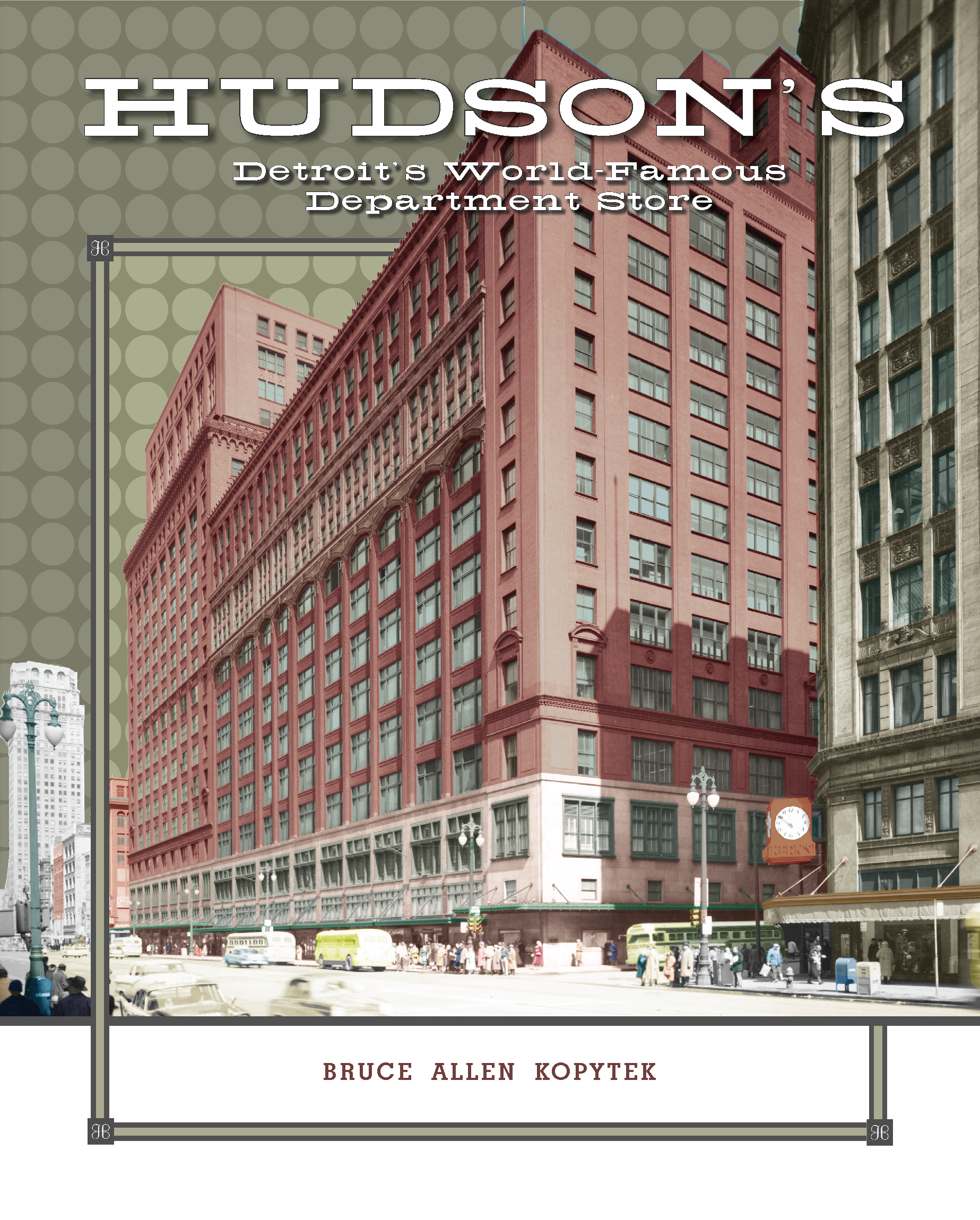